This is the excellent company I use: 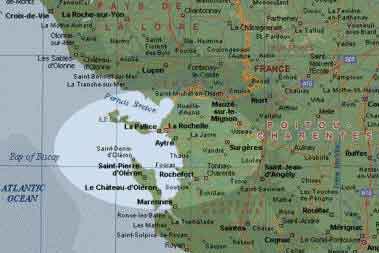 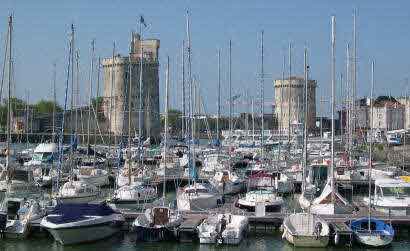 Still a very Important fishing port on Bay of Biscay

The Siege of La Rochelle forms the background for 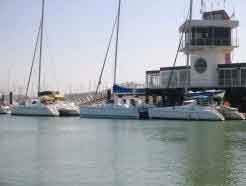 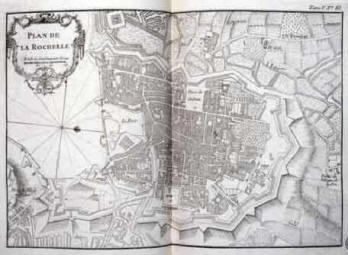 The siege of La Rochelle - The three Musketeers story..... 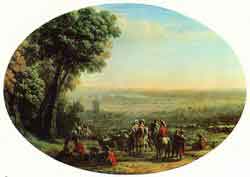 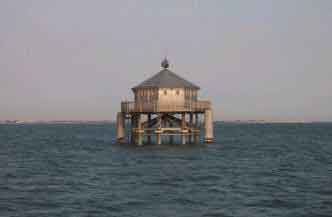 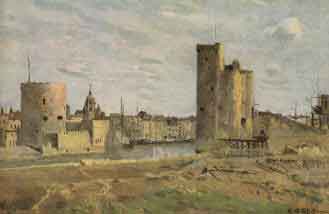 65 in Port Neuf & 90 in the Bassin des Yachts - and a new extension in Les Minimes for another 350 boats, about to be built

has one of, if not the largest, Yacht Marina in Europe.

is well lit and available at all states of the tide except possibly low water very big springs.

Les Minimes has more facilities than anywhere else in Europe, 4 travel lifts, 4 cranes, a dozen or so chandleries, engine repairs, sail lofts, marine electronics, life raft servicing etc etc... Many prices are better than the cut price UK shops! You can have your mast or boat transported to the Med or to UK by lorry from here - 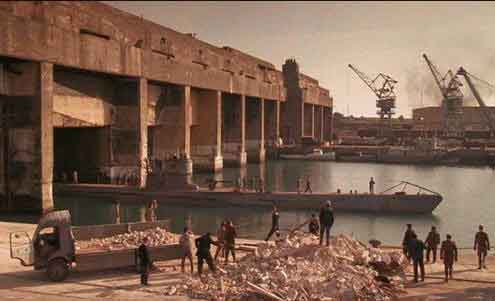 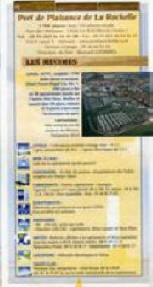 These are the WW2 German Submarine Pens at La Rochelle

and were the 'Das Boot' location.

has more yacht refit/repairs facilities in one place than anywhere else in Europe and most are very good and professional.

Les Minimes has local cafes and restaurants, multi screen cinema and some shops but is a long walk, a bus ride or a water bus ride, to the wonderful restaurants, shops, bars and cafes of La Rochelle.

The Taste Vin will deliver the wines & spirits you order, to your boat in Les Minimes provided you know your pontoon number and berth. Mention this web site for a free sample!

A more convenient place for visiting yachts is

right in the centre of town. You can walk to the supermarket, shops, fish market from the Visitors Pontoons situated on the left as you enter by boat, between the twin towers. Christian is the Vieux Port HM and he speaks English. Just park up on the visitors pontoon and he will come and find you to 'book' you in. The cafes and restaurants are all around. Possibly the best sea food is at Andre's and most sailing folk end up in Fitzpatrick's just opposite on the front.

Except at Low Water springs, you can get into the Vieux Port by following the channel. Do not 'hug' the port hand buoys, around low water, as they are laid on the 'top' of the slope of the channel.

Use the transit, day or night, of the two lighthouses lined up. Very simple and safe entrance in almost any conditions.

As you pass between the two Richelieu towers you will see the water bus and tourists boats on the left and just past them pontoons, two of which are marked visitors. Tie up or raft up, plug into the mains and go ashore and enjoy the the fruits of the sea and the wines of the district in the vast range of cafes and restaurants all around!

If you intend staying longer than a few days or a week, speak to Christian the port captain and he may find you a place in the 'Bassin a Flot' which you can lock in and out of 2 hours either side of high water. The Vieux Port office is just past the footbridge over the bassin a flot lock gates. Showers, loos etc are next door to the Aquarium and Christian will give you the entry code.

Although this is the most popular 'parking place' for visiting yachts there is normally a space or two and it really is very convenient for everything in the town - if a little noisy sometimes - night life abounds in here - music and film festivals as well as international class restaurants and little side street cafes.

Larger or deep draft yachts can turn to starboard just before the two towers and head towards the Lock Gates to the Basin de Chalutiers and Lifting bridge. VHF channel 9

Bigger vessels will want to go into the Bassin De Chalutiers which has places for yachts between 17 & 90 metres LOA - it also accommodates some smaller yachts and catamarans. The Bassin Des Yachts has 4 metres depth and is available for yachts up to 14 metres and up to 12 metres beam.

The extension to the Les Minimes marina was finished at the end of 2014. 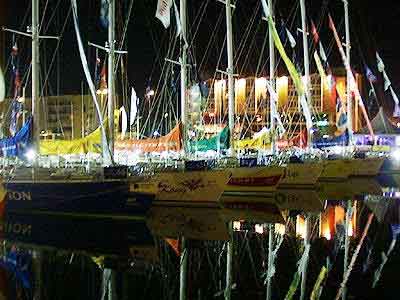 It is possible and very reasonable to winter afloat in the Basins or Les Minimes at half the summer prices!

Wintering hauled out is possible via the various yacht sales/management companies in the commercial area where the travel lifts are.

Christian, the Vieux Port captain, speaks excellent English as do many of the chandler and yacht management companies.

Fort Boyard - home of the game shows, is just across the bay

Getting to or from La Rochelle

Both Ryan Air  and British Airways fly into the local airport.

A taxi to the airport from the Vieux Port area costs around €10 or there is a bus service from the Place de Verdun. The French high speed trains TGV leave regularly from the station for Paris and the south of France

The town web site in English is at:-

The Marina site in French is at:-

The La Rochelle Boat Show (2nd only to Paris but with the more boats afloat) is at:-

A BRIEF HISTORY OF LA ROCHELLE

10th Century The town of La Rochelle founded – almost a natural harbour in a well protected corner of Biscay.

1230 The Knight Templers, who later became the British 'Free Masons', establish a fleet of merchant ships in La Rochelle.  King Henry III gave them a licence to bring wine from La Rochelle to England.

15th Century  La Rochelle is now the largest harbour on the Atlantic coast of France, trading mainly in wine and salt.

1585 The majority of the inhabitants became protestants with the Huguenots. La Rochelle becomes the greatest stronghold of the Huguenots in France and the centre of resistance.

The King Louis XIII is not amused.

1620s. The city enters into conflict with the central authority of the King Louis XIII. The Duc de Richelieu is sent to sort it out - with the musketeers.

June 1627  The English King Charles I sends his favourite commander, The Duke of Buckingham, with 80 ships and 6,000 men to help the La Rochelle rebels. They landed on the Isle de Rey, which was still loyal to the French King Louis, and tried to capture St Martin. Louis sent small ships with cannon and  troops to reinforce the stronghold and eventually Buckingham lost so many soldiers he was forced to withdraw back to the UK leaving La Rochelle to defend itself. 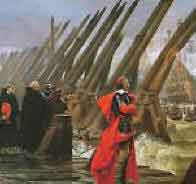 into the Siege of La Rochelle. The Knight Templar are forced into hiding and some manage to escape via the cellars and tunnels under the town.

French engineers isolated La Rochelle with entrenchments 12 kilometres long, fortified by 11 forts and 18 redoubts. They also built with 4,000 workmen a 1,400 meters long seawall, to block the seaward access to the city. The wall was built on top of a foundation made of sunken hulks, filled with rubble.

October 28, 1628 After seeing the English protestant ships retreat the city of La Rochelle surrenders, looses it’s Mayor – Jean Guitton and all it’s privileges including that of ‘Freeport’.  The residents of La Rochelle had resisted for 14 months, under the leadership of the mayor Jean Guitton and with the gradually diminishing help from England. During the siege, the population of La Rochelle decreased from 27.000 to 5,000 due to casualties, famine and disease.

The Siege forms the background for The Three Musketeers by Alexander Dumas.

1670 La Rochelle constructs small rapid boats which served everywhere as scouts and which were called frigates.  Their total length often attained thirty meters and the height, eight meters. The crew of these boats rarely surpassed thirty sailors.  To assure their defence, the vessels were prepared with about fifty cannons.

1689  The persecution of the Huguenots culminated with the revocation of the Edict of Nantes by Louis XIV and many Huguenots emigrated, founding cities like New Rochelle in the vicinity of  New York.

1700s La Rochelle trades with the ‘New World’, dealing in the slaves from Africa, sugar from the Antilles and most importantly the  fur trade from Canada to where more colonists emigrated than from any other single town in France. This was a period of high financial, artistic, cultural and architectural achievements for the city.

1789-1799 During the French revolution life was relatively peaceful in the city, especially in comparison with nearby places such as Rochefort, where the clergy was violently purged, and the Vendée area, where a counter-revolutionary uprising took place, leading to a bloody civil war between monarchists and republicans throughout 1793.

1864  The "Bassin à Flot"  of the harbour of La Rochelle was the site for the maiden dive experiments, of the first mechanically-powered submarine in the World, Plongeur, commanded by Marie-Joseph-Camille Doré, a native of La Rochelle. The submarine was armed with a ram to hole the hull of enemy ships, and electrically fired torpedo, fixed at the end of a pole!

February 18, 1864 Plongeur was towed to La Pallice and dived to 9 meters. First mechanically powered submarine in the world!

WW11 During the Second World War, Germany established a submarine naval base at La Pallice, the new commercial port of La Rochelle. A German stronghold, La Rochelle was the last French city to be freed at the end of the War.

1939: when the German armies arrived, 'Mayor Léonce Vieljeux' was the city’s first resistance fighter. He opposed the posting up of Nazi propaganda and at the same time he was helping the engineers and workmen in his factory who belonged to the Alliance resistance network to find escape routes.

Sunday June 23rd 1940, the first German to come to him was a lieutenant carrying under his arm a swastika flag which we wanted to fly from the roof of the city hall. Léonce Vieljeux sent the reply that he was a colonel, and that he would not take orders from an inferior officer, even if he was from a victorious army.

September 22nd 1940   Léonce Vieljeux was relieved of his office of mayor, and expelled from the city in 1941. After returning to the city he sent to the Schirmeck concentration camp near to Strasbourg. He remained there from until September 1st 1944. when he was taken to the Struthof concentration camp.

Léonce Vieljeux, in his 80th year, was shot together with 300 men and 92 women at Struthof concentration camp

January 27th1945 His funeral service was held in the Protestant church, before a crowd of 3000 citizens of La Rochelle, of all religious persuasions

September 12th, 1944 to May 7th, 1945 The advancing Allied troops  besieged  the 20,000 Germans troops in La Rochelle, Isles de Rey and l’Oléron. After the main German capitulation on May 7th 1945 the Germans in La Rochelle, agree to surrender.

The submarine naval base at La Pallice still exists and was used for the for the German television film ‘Das Boot’. The U-Boat scenes in the movie ‘Raiders of the Lost Ark’ were also shot in La Rochelle.

1980s. The important Atlantic fishing fleet is moved from the Old harbour to specially built facility at La Pallice allowing for development of yachting facilities near the centre of town.

June 24, 1982,  JEAN-LOUP CHRÉTIEN, who was born and educated in La Rochelle, become France’s first man in space. A veteran of three space flights, Chrétien was the 10th Intercosmos cosmonaut, and spent a total of 43 days, 11 hours, 18 minutes, 42 seconds in space.